Today was the last DA Event of the season with the Off-Road ride led by Bob starting from Pulborough. It was a cloudy day with initially spots turning into heavy rain later.

I do not do any substantial Off Road any more so I met the group at elevenses.  I took  the train to Billingshurst and rode to meet for elevenses at The Old Mill Cafe, Wisborough Green. Numbers were well down on the usual with just 5 attending. For a change Arun Adur had the most attending with Paul, Richard and Peter Train. Sam represented Bognor Chichester and  just Bob for Horsham Crawley. 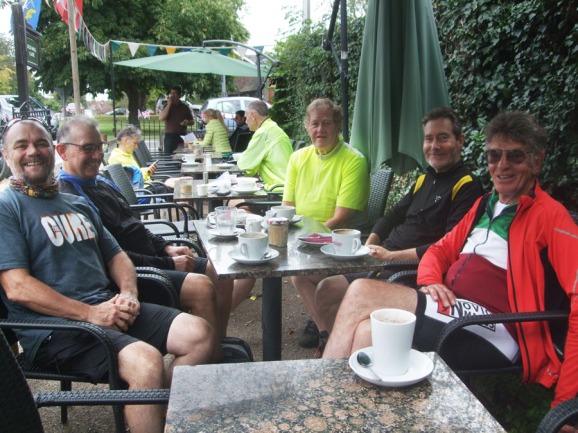 Sam was well prepared with his giant tractor tyres.

My original plan of riding more of the route home was abandoned in favor of the train back as the rain came in more and earlier than forecast. Bob was planning to get most of the Arun Crossings in before lunch and then finish the ride.

Sam reported that he had  2 punctures & lost a bit off the pump. In total coming from Chichester his mileage was 67.5miles and he was totally soaked to the skin by the time he arrived home.

Richard Boulton from Arun Adur reported that the group  just made it to lunch at Loxwood before waterproofs were needed. Peter decided to head for home on the road. Just light rain but we decided on a quick route back along the canal and down to Wisborough Green and then  across the track to Lee farm and back roads to Pulborough. Sam left us to head back via a track to Fittleworth, he was  worried about the battery power to get him over the Downs, and his back tyre was looking soft. No joke to pump up those giant tyres!

The rain didn’t seem to amount to much to start, just got damp and tracks still in good condition. Still, Richard was glad to reach the car, Paul was cycling back to Worthing.

My latest processed picture was one of many taken a week ago last Saturday at the Chichester City Centre Cycling Criterium Races and includes zoom effect editing.

For a larger picture and more details see