There was a beautiful start to the day with early sunny skies though cold and soon giving way to gathering clouds. Temperatures reached 16C with a strong SW wind. Sam was the leader at 9.00am Chichester Cross and he was joined by myself, Mike and Bob.

Sam was out on a new (sort of) Electric bike. The latest version of the previous one, Cube, but a larger better suited frame and all the equipment from the old bike transferred over except for keeping the more powerful!! New motor. 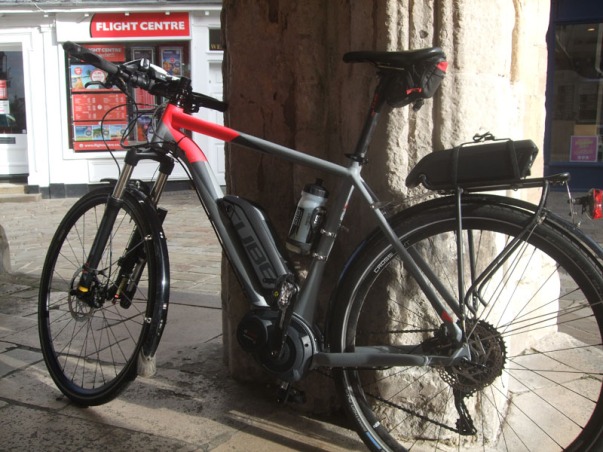 We took the usual route out via West Street and Clay Lane and on via Woodmancote and Westbourne. On the hill up from Westbourne we were easily overtaken by some fit young girls save for Sam who powered up the hill ahead of them at 15mph.

Our elevenses stop was at Horndean Garden Centre Cafe just in time as the the first spots started for a shower. We requisitioned an under cover area for a bike park.

We enjoyed hot drinks, cakes or sandwiches while it rained outside and cleared up just as we were ready to leave.

The original destination for lunch was Dunridge near Bishops Waltham. However with the rain and more forecast to come Sam made an executive decision to divert to Lotts Cafe, Hambledon. I decided to head back from Horndean and make it a half day ride. On the way back I saw a lot of riders coming the other way on the route of the Southern Sportive based on Petersfield. Further on I had decided to take a lane between Southbourne and Hambrook but a short way along came across deep flooding from yesterdays rain.

Discretion was called for and I diverted to take the cyclepath along the main road back to Chichester. My mileage from and back to Pagham was 43.

My latest processed picture was taken earlier this year in London before they started putting scaffolding on Big Ben.

For a larger picture and more details see