The weather today was mainly cloudy with a little sun midday and dry with light winds. Temperatures started cold but reached 8C in the afternoon.

Sam was the leader and he was joined at Chichester Cross by myself, Bob, Mark and Mike with Jeff joining us in West Street so 6 in all.

We headed out on West Street at a brisk pace and then Sam decided on a change taking us on the A259 via Fishbourme, Bosham and Southbourne. We then headed on lanes via Westbourne. We took a brief break at the top of the hill from Westbourne where I said I was suffering from PCI (Post Christmas Inertia) Sam commented he hadn’t heard of that before, not surprising as I had just made it up .

We then headed on via Rowlands Castle passing the Cafe and then on to the Cafe at Horndean Garden Centre for elevenses. It was a day for an indoors stop with some good warm heating.

Then out into the cold again 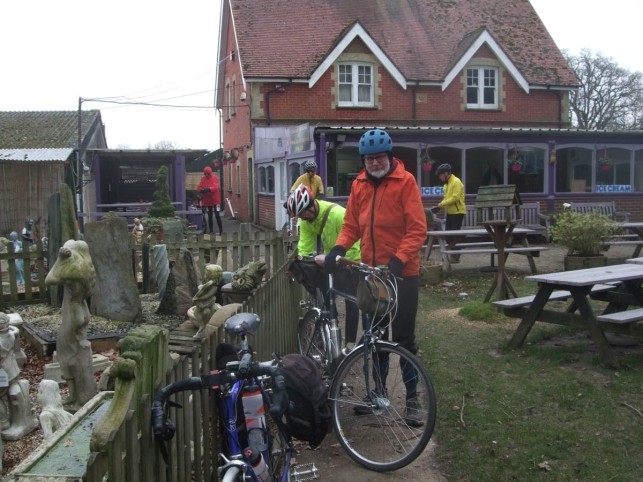 From here I headed back to make it a half day ride. The rest continued on lanes via Cathrington and Clanfield and over the hill near HMS Mercury before descending to The Isaak Walton, East Meon for lunch.

The full days ride from Chichester was due to be 50 miles. My mileage from Pagham for the half day was 41.