For a change a dry day for the Ride today. It was mainly cloudy with light winds and temperatures of around 10C but reaching the dizzy heights of 15C when the sun came out in the afternoon. Jeff was the leader and he was joined at Chichester Cross by myself, Sam and Russell. We chatted to a lady who admired Russell’s Bike. I asked her to take our picture so apologies for the quality but she managed to get it out of focus probably by partly covering the lens with a finger. 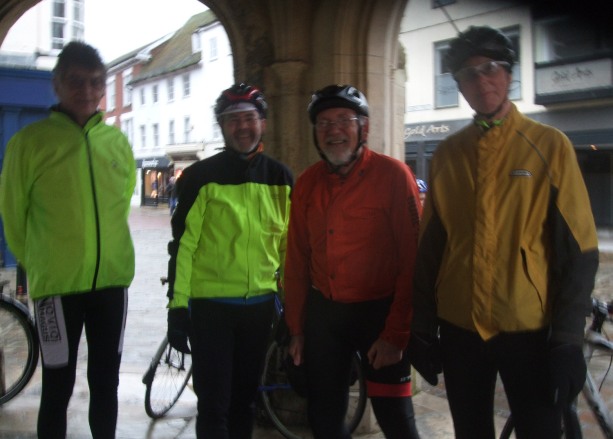 We headed out on a unique Jeff route taking lots of back routes and paths in a Tour of Chichester style coming out by Homebase. Then it was on via Westhampnett and Strettington to join the lane over the Downs up Sculpture/ Pillygreen Hill. Then down to East Dean and the valley lane  to join the main road at Upwaltham. After a fast descent of Duncton Hill we joined the quite lane to Seaford College and on to Graffham where we stopped for Elevenses at Graffham Village Shop.

I headed home via a Heyshott and Cocking soon after we left while the rest continued to lunch at Midhurst. Jeff continues the narrative as follows with thaks for the pictures –

We did the back roads to Lavington and all enjoyed a roast beef sandwich at Garstons Cafe Midhurst. 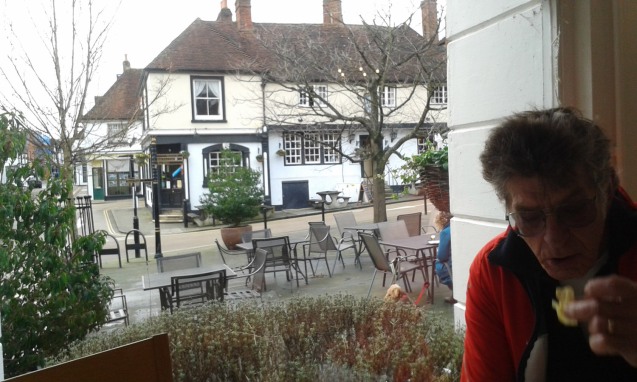 Then something strange happened, the sun came out . So we jumped on the bikes and headed out to Bepton where Sam’s computer recorded 15° briefly.

We stopped so I could try Russ’s saddle and Sam tried my bike which he liked (he has never been complimentary about my bikes before ! ) I liked the saddle so it was back slapping all round.

The back roads to Cocking were what you would expect in the winter.

From there it was the main road to Singleton where Russ and Sam turned east for a pm coffee stop at Aldingbourne. I headed back to Lavant on road then Centurion Way back to Chi. My mileage read only 36 miles but everyone agreed it was  a good ride.

On the return ride I spotted quite a few showdrops at the side of the road, nice to see as a first sign of spring. These were taken near Heyshott Common

My mileage from and back to Pagham was 46.