For the Easter Sunday Ride today it stayed dry unlike the rest of the long weekend. It started cold at 4C later reaching 8C with mainly cloudy skies save for a few hours of sun in the afternoon.

I was the leader and I was joined at Chichester Cross by Bob, Sam and Russell. Sam was down with a chest infection which had lasted for weeks and was not really up to coming out but came anyway but only as far as elevenses.

With all Garden Centres and their Cafes obliged to close on Easter Sunday we headed for Rowlands Castle for elevenses. We took the usual route out via Clay Lane on the South Coast Cycleway. On taking a lane near West Ashling we came across 3 large packs of rubbish dumped by fly tippers in the middle of the road, such amazing idiots.

We continued via Woodmancote and Westbourne and on to Rowlands Castle for elevenses. There were less cyclists there than usual and we readily got an inside table in the warm. After elevenses Sam headed back and Russell too as he had a family occasion leaving just Bob and myself to complete the ride.

We headed on via Horndean and then a lane towards Cathrington. Then it was a narrow quiet lane north of Denmead with the little lane ironically called Broadway. Then it was more lanes via Worlds End (not today) and passing close to North Boarhunt. Then it was on via Boarhunt and a gradual climb up to the western end of Portsdown Hill to Fort Nelson the free to enter Royal Armouries for lunch. The cafe had been moved from the visitor centre via a long trek to the Parade Ground. Not many people seemed to have made it that far.

Bob did his first go at a selfie and was already curious about selfie sticks.

Then it was on to Portsdown Hill Road. Apart from the traffic this is one of the best routes around for views. The narrow ridge overlooks Portsmouth Harbour and goes on for miles with sometimes views both ways to the harbour and north over the Downs. I stopped at a layby for a shot including Portchester Castle, The Harbour and the Spinnaker Tower.

Then it was a long long descent to Havant with the usual wait at the crossing for a train. From Havant we continued via Emsworth and turned off to take the lane to Prinsted. Here we came to the Southbourne Sea Scouts Teas. I recently received an email from them to say they were open from April to October on Saturday and Sundays. Russell has put them down for a Saturday Ride in the draft Summer Rides List. I made the sacrifice of stopping to test them out on their first day of opening. I would say they well passed with hot drinks and large slices of cake for £1 each. 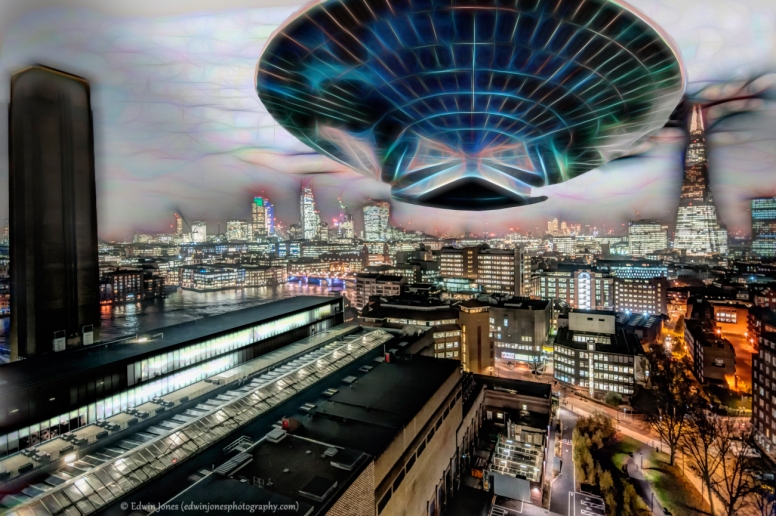 The image was created from a night shot of London taken from the Tate Modern combined with a shot of the large entrance canopy of the EDF building in Paris which looks amazingly like the Saucer Section of the USS Enterprise.