It was a pleasant sunny evening  bring a good turnout of 12 at the start at  Arun Leisure Centre with 2 more joining us at the Pub. The Group included 3 newcomers being Chris and Val plus Scott

Steve was the Leader and he took us down the cyclepath  towards Butlins where we turned left and made our way down Limmer lane. Then it was on to the Cycle Path through King Georges Park. 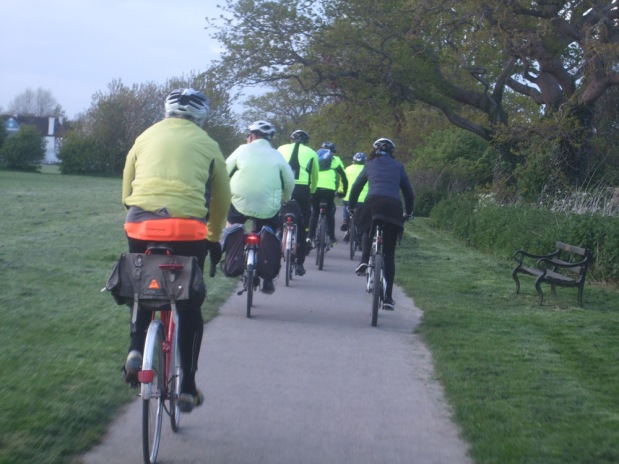 Then  along Middleton Road out to Comet Corner where we crossed the busy A259 and made our way to Yapton. There it was a right into Burndell Road and Yapton Road with a brief stop at the edge of the village to switch on lights. We continued to the A259 where we turned on to a path which when we get round to it will be part of the new cyclepath. Here then is a picture to answer the many motorists who argue on Facebook that the new path is a waste of money, will be little used by cyclists who will keep using the road anyway.

After crossing the Road we headed straight up a lane to stop at the Black Horse Inn where we headed indoors to get out of the evening chill and were served by a French barman. Russell and Julian soon joined us coming from Littlehampton.

I discussed with Russell and Steve and we decided to split the group in 2 for the return to make less of an obstruction for motorists. I led the 2nd group and kept a suitable distance from Group 1. We headed directly back on the main road which is usually a lot quieter in the evening. We could see the new cyclepath on the north side which looked in the light from cars to be fairly well advanced and is due to be finished by early next month.

We returned from Comet Corner via Middleton. Mileage for the ride was about 11. My mileage from home at Pagham was 20.7. For the first time as a test I recorded my mileage on my Smartphone using Stava and the map of the route is below. This includes my ride from home. 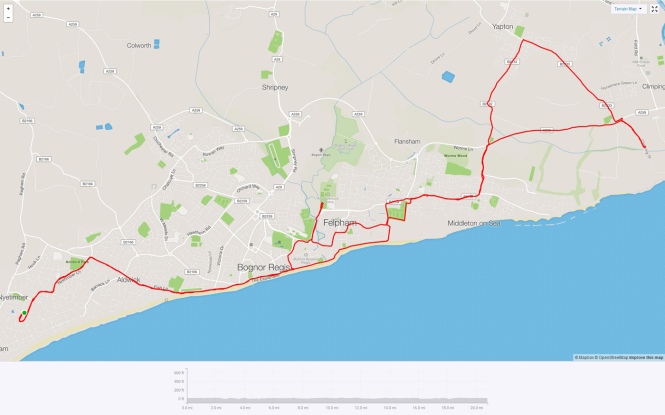