17 riders out for today’s ride, we set off from Bognor Library in 2 groups as we adopted our new policy of no more than 10 riders together so as to make it easier and safer for cars to pass us, I led the first group of 10 and Mike led the second Carol being tail Rider for any problems which she could report via our walkie talkie radios.

We headed to Arun Leisure Centre and out to Hoe lane (as the new Bognor Littlehampton cycle path which we were hoping to use still is not completed) we stopped for regroup at the church then after 5 minutes to check everyone was OK set off towards Yapton passing through Ford and turning left into Horsemere  Green Lane at the end of lane we turned right and made our way to the busy A259 we crossed and into Ferry Road at the end we crossed the river Arun turned right and made our way down the river to the sea, at this point my friend Graham took the reins and led us onto the cycle track on the prom which was surprisingly not as busy as I thought it would be this must come with experience and the many many many  many years of experience Graham has on me Thankyou Graham for your assistance, we got to Mewsbrook café and sat outside in the lovely sunshine and all enjoyed the great hospitality provided by the staff Tea Coffee Chips Cakes and cold drinks. 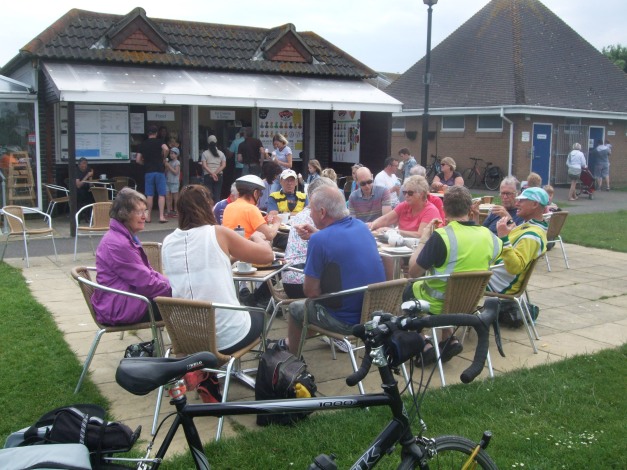 The return trip was led by Carol and  I became tail end Charlie and Mike continued to lead second group.

Carol retraced our track right back to Yapton but instead of going to Hoe Lane went via Comet Corner, the ride was ended at Flansham Park as we were all going our separate ways.