A miserable Saturday afternoon with an Easterly wind and almost continuous drizzle for our ride to Edgcumbes at Ford. Arriving at the Bognor library start point i was surprised to see anybody waiting at all. But there were 8… Mike, Alan, Steve, Samantha, Harvey, Chis, Steve Woods and me. 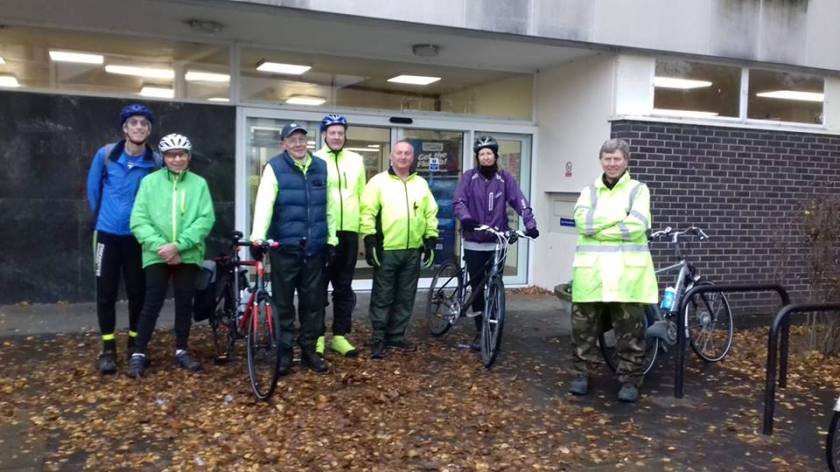 After discussion as to whether the Cycle Bognor “no rain guarantee” would hold-which it did as the continuous drizzle never turned into actual rain- we set off via back lanes past Felpham cricket pitch to the Arun Leisure Centre where we stopped to collect Claire.

Then it was via Bognor Golf Club to and through the Blakes Mead estate, into North Road and Hoe Lane at Flansham. The Barnham cycle track was officially closed for repairs and although unofficially passable it is very muddy. So we turned right instead of left at Hoe Lane to ride down past the duck pond to the A259 and the Littlehampton cycletrack.

At this point Steve Woods, who had been having bike troubles, decided to abandon the ride and head for home to investigate wheel and tyre issues.

The rest of us followed the cycletrack to Comet Corner then up to Yapton, through Tack Lee Road and over the old canal bridge, then to Barnham turning right under the bridge  into Lake Lane, then the foot crossing over the railway into Maypole Lane, from where it was a straight ride to Ford Lane and Edgcumbes. As we arrived Andy joined us, having made his own way there and making 10 out in total.

After a convivial coffee, we headed for home via Ford Road to Horsemere Green where Alan pulled up with a puncture. For unknown reasons it proved quite difficult to strip and replace the inner tube but with several pitching in to help it was eventually done, although Alan decided to head straight back as it looked as though the new tube might deflate as well. “Alan writes – Many thanks to the entire peloton who stopped with me today in the rain while my puncture was fixed. Special thanks to Mike who managed to get the tyre off the rim and back on again”

After this we went down to the Oystercatcher pub where we joined the cycletrack towards Bognor.  With people people peeling off for home along the way, we turned down to Middleton and through estate roads to the sea then followed the prom into central Bognor where the ride ended and we were in time for the grand Christmas lights switch on.

The round trip mileage from and back to Bognor library was 17.2