Six of us met up at Chichester Cross on a fine but blustery day, with a stiff north easterly wind; Sam, Michael, Rosie, Russell, Harvey and Bob leading the ride scheduled for Fort Nelson. The picture includes Chris as well, on his way to bell ringing at the cathedral. 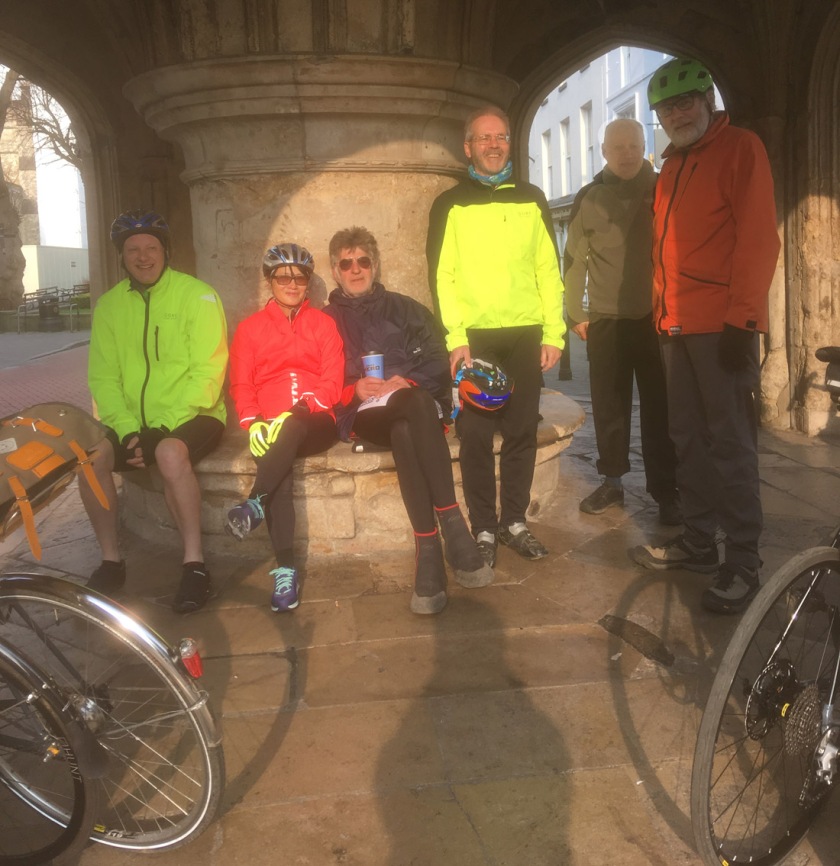 We made good progress down Clay Lane through Westbourne and Rowlands Castle to the garden centre at Horndean for coffee.

But by then the wind seemed more of a problem than the forecast had suggested (to be fair, it had said it would be worse in coastal districts). The worry we had was not getting to Fort Nelson, but returning along the top of Portsdown Hill; the wind threatened to be both a headwind and a cross wind, and potentially dangerous on the busy and narrow Portsdown Hill Road. We considered going anyway but returning on the coastal route from Portchester to Havant, but that isn’t a very pleasant ride with the M27 thundering just alongside. Russell, who had pointed out the problem, suggested East Meon instead, which seemed the nicest idea, so we set off through Catherington and Clanfield, up to Chidden Down. We joined the road from Old Winchester Hill which was very exposed, and the wind was terrific, which made us glad we had altered the plan. After Sam’s chain came off and he’d got it back on, we had the pleasure of zooming down the hill to to the Issac Walton at East Meon for probably a better lunch than we would have got at Fort Nelson. 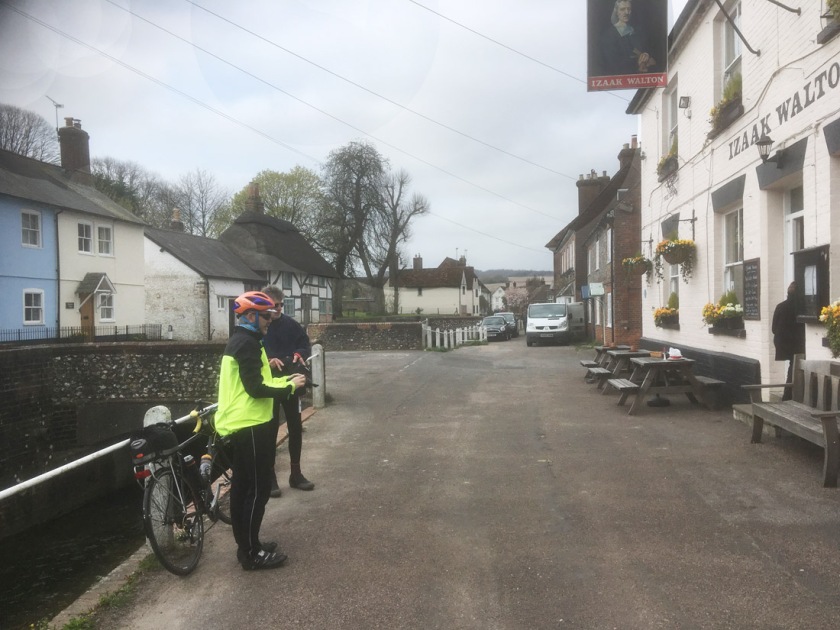 Afterwards we cycled towards Petersfield, but instead of the usual route up past the Butser quarry next to the A3, we carried on to Buriton and up the steep hill at Kiln Lane. From there we returned via Rowlands Castle where Russell left us but the remaining five had a cuppa at the Bumblebee cafe with another cyclist, who kindly took a pic.

Harvey left us soon after to go home by a more direct route, and the remaining four returned to Chichester the way we had come, through Westbourne and Woodmancote. My mileage to and from home (Chichester) was 48.

Six met at Walberton Pond on a bright but initially chilly morning for the ride to Rudgwick. Sam, Mike, Michael and Maureen joined myself (leader) and Steve, a newcomer. Steve’s bike caused some interest, being a very up to date all carbon machine, complete with lightweight carbon wheel – making some of our bikes positively retro!

After a brief discussion about possible routes and the battery range of the e-bikes, I came up with a revised route of about 60 miles, to ensure that everyone had sufficient amps to return successfully!

Our outward route took us through Madehurst, a rapid descent of Bury Hill (first motorbikes of the season very much in evidence), through Coates and Fittleworth, over Riverhill for elevenses at Kirdford. We didn’t time it too well and had to join a queue with a lot of other cyclists, taking just over 20 minutes to get served our coffees. Sam didn’t waste this time, helping/advising on a broken gear cable replacement.

Leaving Kirdford around 11.30hrs, we took a fairly direct route to Loxwood (using the short bridal way to view the water mill restoration and cross the Wey canal), turning left at the Mucky Duck pub to go towards Hornhill and then ascend Cook Hill before dropping back into Loxwood and the Milk Churn, which was surprisingly quiet when we arrived, allowing us to bag a prime spot on the veranda, in the now very pleasantly warm sunshine. The kitchen staff were ultra efficient and aided by hi-tec buzzers which alerted one to their order being ready, we were all served within 5-10 minutes of sitting down.

A quick check of everyone’s status showed the e-bikers to both have good reserves remaining but our newcomer, Steve, not surprisingly was feeling the hills in his legs. The return ride was therefore almost a rerun of the outwards one, with an ice cream stop planned for Bignor Roman villa before the final decision of the day – the Khyber or Duncton Hill.

Our newcomer left us at the White Swan, Fittleworth while we pushed on to Bignor, where ice creams, tea and coffee were enjoyed in warm mid afternoon sunshine.

Just like Brexit we couldn’t all decide on a route home, so we decided to split the ride and all use the most direct for us individually – I returned via the Khyber, whilst the others took the Duncton Hill option.

My overall mileage for the day was 75 miles, the circular round trip to Walberton Pond would have been 65 miles, our longest so far this season.

The weather dawned cloudy but dry with sunny spells for a ride to The Quarterdeck Café in West Itchenor.

An unprecedented 22 cyclists gathered at Chichester Library for the ride.  As a consequence, Philippa split the group into 2 smaller groups with Steve Woods leading the second group, which set off 10 minutes after the first group had left.

The first group set off and headed west towards Westgate, over the Fishbourne crossing and then carried on until the end of the road, before heading through the A27 underpass towards the A259.  After emerging from the underpass, everyone then took a sharp left to take the cycle path alongside the A259, crossing the road in order to then turn right down Appledram Lane.

After a few yards, the group turned left onto Salterns Way, and carried on along the cycle route via Dell Quay Road and through Salterns Copse, eventually emerging at Chichester Marina.  The bridge over the lock wasn’t due to open for another 10 minutes, so the group took the long way round the marina, eventually crossing Salterns Lock over the old Chichester Ship Canal, to emerge into Birdham Pool.

After regrouping with the second group at Birdham Church, the first group then set off again, with the route going along Salterns Way down Westlands Lane and towards Westlands Farm.  Salterns Way then continued west towards Itchenor Road.  As Philippa wasn’t keen on a large number of cyclists travelling down the bendy, narrow road through Itchenor, she decided instead to go straight on towards Westlands Copse which came out in Spinney Lane.  After admiring some very expensive mansions (most of which looked uninhabited), the group took a short path along the coast to Itchenor Sailing Club, eventually emerging onto The Street at Itchenor.

From there, it was just a short cycle to The Quarterdeck Café.  Philippa had considered splitting the group between the café and pub, but in the end, the café coped admirably.  Fortunately, it wasn’t very busy and they seemed more than happy to accommodate us.

By this time, the sun had come out and the group enjoyed sitting outside with their drinks and food.  After staying for about 40 minutes, everyone got back on their bikes and the same route was taken back to Chichester.  At Chichester Marina, those wanting to go back to Bognor branched off to take the canal home.  A great time was had by all, and it was great to see so many new faces.

I was the leader and joining me at Chichester Cross were Sam, Paul and Bob for the ride to West Meon. Conditions were cool with a fresh north westerly wind. I led the group up a quiet Centurion Way and then onto Compton via West Stoke. All outside tables were taken but there was plenty of room inside for a relaxing half hour.

Continuing our journey, we rode through Buriton and East Meon, where Sam’s battery started to indicate impending exhaustion. Determined to wring everything out of it, Sam decided to push on to our planned lunch stop at Cuppacheeno, West Meon. Chris joined us, making 5 out. He had left Chichester after Bell ringing and had seen the short ride group en-route.

We arrived just as a large group were leaving and thus enjoyed a leisurely lunch in the sun. Lovely hot buttered crumpets with marmite! (Sam misheard my order and thought I was telling the waitress she was hot crumpet…..)

We where then into the business part of the ride, an ascent of Old Winchester Hill and a fast wind assisted ride along the ridge before descending into Horndean for afternoon tea.

The final 13 miles back to Chichester were very easy cycling, with a strong tail wind.

Total distance for the ride was 51 miles.

The weather today was much improved over previous weeks with sunshine and brisk but not gale force winds. There were 5 out at Chichester Cross for the short Ride to Compton. Arthur was the leader and he was the joined by Lynn, Harvey, Michael and Alan.

The ride out was dogged by a strong NW headwind and the group were glad to stop for an early elevenses at the Woodmancote Inn and a warm fire.

The ride continued against the wind via West Marden for another stop at Compton.

The return ride was much faster aided now by a tailwind. 3 of the group stopped off at The Roman Palace Cafe at Fishbourne for a final stop.

15 riders came for today’s ride on a dry but blowy day with Steve and Carol leading. We split the group into 2 with Steve leading the first 8 followed by a gap with Mike leading the second group of 7 with Carol as the back marker. As usual Steve and Carol had their radios with them to keep in touch from the front to the back making sure all was OK. 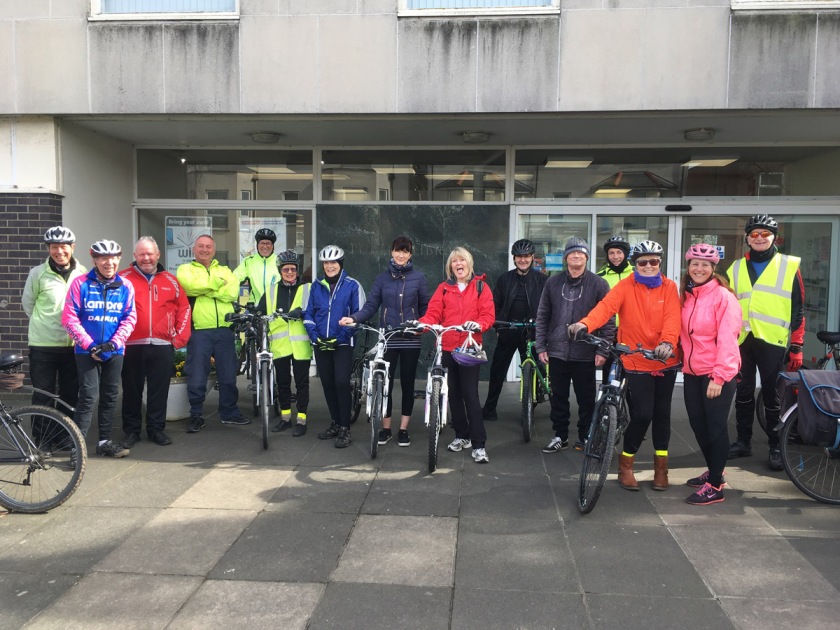 We made our way to the new A259 cycle path turning left at Comet Corner into Yapton. Heading out of Yapton on Northend Road, we turned left in Lake Lane and picked up the cycle path to Walberton where we stopped for a photo.

Heading towards Fontwell we took the underpass to avoid busy A27 turning left then right into Slindon Bottom Road. End of the road turned right into climb reaching Slindon college where we stopped to assemble. From here all down hill to our destination The Forge for Sandwiches, Massive sausage rolls, hot drinks and large portion of cakes. All but 4 sat outside where we took a vote on route back. Majority wanted quick, no hill ride back.

Carol led the first group towards A27 followed by Mike with the second group and Steve as the back marker. We all crossed a very quiet A27 heading towards Walberton village turning right at the roundabout towards Yapton. Through Yapton and onto Comet Corner where we regrouped.

From here we went back to Bognor Library with riders peeling off on the way.