Just 4 met at Walberton pond for an early start to the I-Spy Ride organised by Horsham & Crawley section. Sam was nominal leader for the day and he was joined by Paul, Bob and Russell. We had two hours to cycle to the start at Billingshurst Station, which necessitated taking a direct route using mostly main roads. We arrived in good time to find a small contingent of Arun Adur and a much larger group from the hosting section.

Bob M.(Horsham) , briefed us on the day’s event, highlighted the need to reach the lunch stop by noon and doled out the route sheet with 34 slightly cryptic observational questions to be completed during the morning ride. The other sections cycled off whilst we enjoyed a coffee at the station. when we finally got going, we were immediately held up by the railway crossing gates closing, much to Bob’s  ( M) amusement.

The route used a series of quiet lanes and it wasn’t long before we overtook a confused  Arun Adur team and then the first of the host teams. We were a bit surprised but as we seemed to be finding the answers quite easily, pushed on. A few miles further and we were the lead team on the road, having passed the second Horsham team, this was to be significant later on………

Some lovely lanes and devilish questions later, we arrived at the George& Dragon, Dragon’s Green at 12.15pm, the first team in. Bob M., tucking into his lunch,  greeted us with a warning that the pub had a big party booked in for Sunday dinner and that food may not be available. Well it wasn’t for the other 3 teams, we were served but the late comers weren’t!

A quick review of the answer sheets revealed that all 4 teams were more or less level, with everything to play for in the afternoon’s 20 questions.

So with some rumbling stomachs the teams set off for stage 2, more lovely lanes, more devilish questions and a deadline to meet at Whispers in Billingshurst before they closed at 3pm. We were first to head off and didn’t see any of the other teams before arriving at Whispers around 2.15pm, to be greeted by Bob M. enjoying a slice of cake. We enjoyed assorted cake and baguettes in the afternoon sunshine as the other teams started to arrive, with the exception of Arun Adur. 3pm came and went, the café closed before they eventually turned up, having ‘mislaid their way’ enroute.

Much to our surprise, we had answered all of the afternoon’s questions correctly and thus emerged as the winning team, albeit by a single point. After a very modest rendition of ‘We are the champions’ and ‘You’re not singing anymore’, we gave the trophy back to Bob M. for save keeping. We returned via the quieter roads , splitting up at Wiggonholt as Bob and myself tackled the Khyber, Sam and Paul ascending Dunction Hill.

A great day out, mileage for the event was about 26 miles, mileage including riding to the start was between 80 to 90 miles. And an away win in the DA Events!

Four of us met up at the Cross for today’s ride to Stedham: myself leading, Russell, Alan and Sam. It was bright and warm in the sun, but not that warm out of it. Thankfully the wind was fairly light, as it was forecast to be northerly, so against us, going, and helpfully veering to southerly to be against us coming back.

We set off up Centurion Way, through Funtingdon to Compton for a cuppa, where we did get a seat despite a lot of cyclists, so not as bad as last week’s ride. From there we went north through South Harting, turning right at Nyewood to go through the little used and delightful if also badly surfaced lanes through Trotton and Chithurst and down Hammer Lane to Stedham. We had lunch outside the Hamilton Arms, glad of the shade still though we noticed it seemed to get colder.

After lunch we went north again briefly to go through Woolbeding and down to Midhurst, then through West Lavington and along to Selham, where we chose the route going east of Gallows Hill through Great Bury to Graffham. The village shop was still open for drinks and ice cream and we were served by a very friendly lady who was so enchanted by Sam’s banter that she suggested we let his tyres down. However we had a good chat instead, and planned our route, I had intended going though the school grounds to go back via Duncton Hill, but Russell wanted to go the shorter route via Cocking as he hadn’t been well in the week, so we decided to go with him, despite Sam’s conviction that he was bound to get a puncture on the Heyshott road. We managed (just) to get everyone in a selfie.

We went down the Graffham Common Road as I was intrigued by a post card I have, sent to my great aunt in 1912, who was a servant to a family who lived there. I had previously found the spot the photo was taken from, which is just next to the house where she was a maid. And just out of sight round the corner is a VR post box in a wall, so likely the same box the card was originally posted in, and Sam was kind enough to say he wanted a look at it. Shown below are the postcard and the same location now. 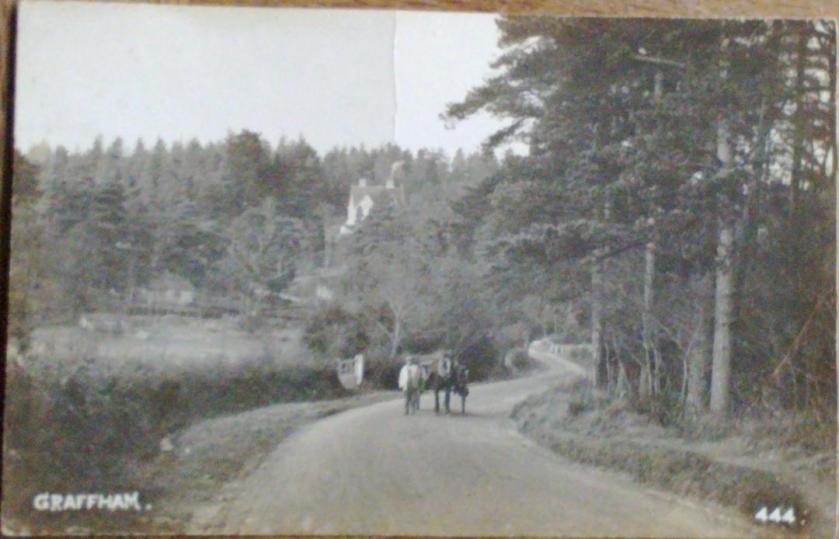 The Heyshott to Cocking road wasn’t too bad in the event (or no worse than its usual appalling state). At Cocking Sam pointed out the Moonlight Cottage tea rooms which seem to be open again, at least Friday, Saturday and Sunday so would be good to consider for a future tea stop. After I staggered up Cocking Hill to rejoin the others, we went as usual to Singleton and joined the Centurion Way at West Dean. A very satisfying ride, my mileage was 50 from and back to Chichester.

Believe it or not, there are still cynics who are not convinced that our Cycle Bognor “no rain guarantee” (terms and conditions apply) is genuine.

I can give no better example than today. With a forecast of intermittent showers, a threateningly dark sky, and an absolute downpour before the ride started, things didn’t look too good. But not a drop of rain fell for the whole ride, and indeed the return was done under a a scorching sun. 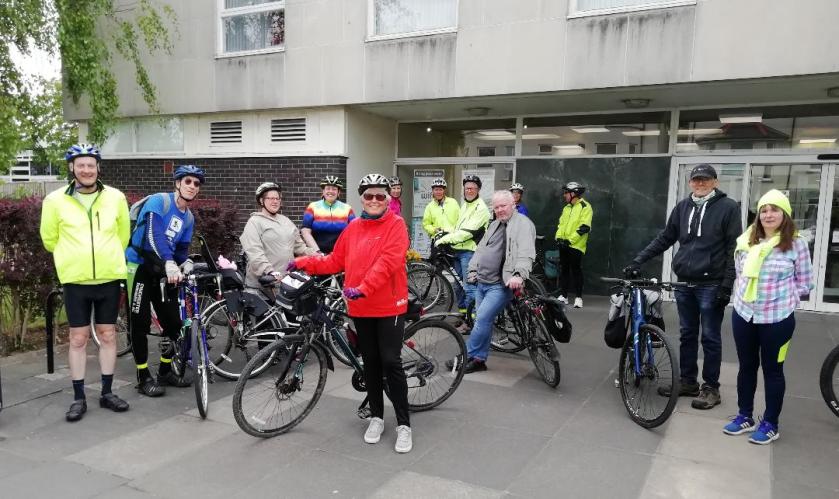 Our route took us via the Arun Leisure centre, The Golf Club, Blake’s Mead and some alleyways 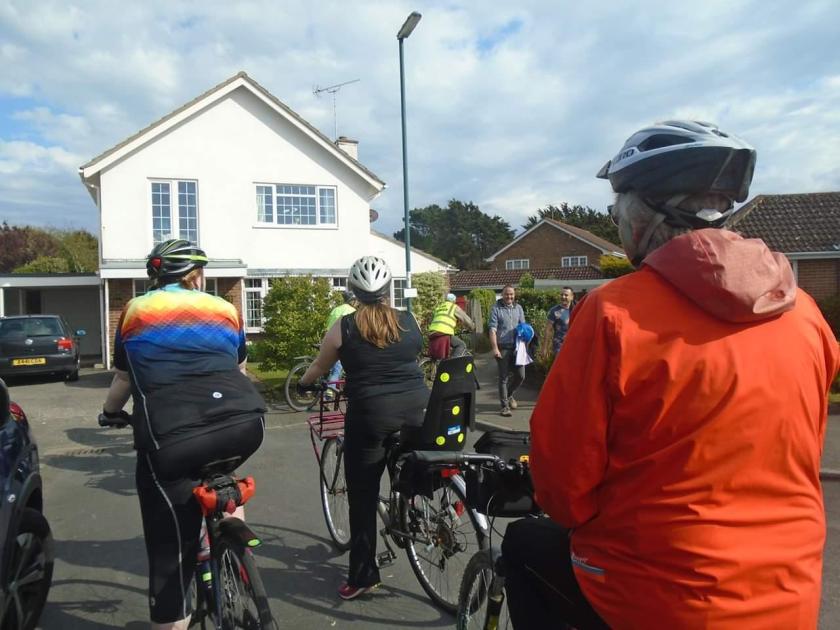 Then the Barnham cycle track up to Barnham where we took Lake Lane, crossed the railway by way of the foot crossing at Maypole Lane, then straight down Ford Lane to Edgcumbes. There we met up with John Maxim, who had come out to take  tea with us.

But after an uneventful ride out a bit of excitement was introduced when Steve found he had clicked his padlock round his bike but left the key at home.  A number of options were considered but we are grateful to another customer at Edgcumbes who retrieved a large hacksaw from his van. Steve then found that his “cheap lock” was more robust than he had given it credit for.   Nonetheless after sterling efforts it was cut off and we set out for home.

Chris Harvey and John went their separate ways and the rest of us returned via Ford Lane, Horsemere Green and down to the Oystercatcher. Then the cycletrack to Comet Corner, Middleton, Summerly and the prom all the way back to central Bognor.

Round trip mileage from, and back to, the library, was 15.3

The winter gloves were back out as five met at a distinctly chilly Chichester Cross for today’s ride to East Meon. I, as ride leader, was joined by Paul, Mike, Michael and Alan. Chris was to meet up with us for lunch, making six in total. (Top temperature was 11c but only feeling like 6c in the wind chill).

We used  a direct route, riding into a gusty northerly wind, to Compton, intending to have elevenses at the village café. However on arrival there were approximately 30 cyclists, all wearing Sportive jerseys, milling around the café. Michael popped inside to “” ask how long the wait was going to be “15-20 minutes”, but on further enquiry we found out that around another 70 cyclists doing the Sportive were expected anytime soon. So it was on to Plan B, into Petersfield for a coffee stop.

Once on the road again, Plan B soon mutated into Plan C and we (I) decided to add a loop into the ride to East Meon, which would give Chris a chance to catch us for lunch but would mean missing out the morning stop. The cycle through the Buriton valley was glorious, definite signs of summer in the trees. The sky was a vivid blue and you could easily have thought it was summer bar for the fact that fingers and toes were decidedly cold! It was then onto Frogmore and our first sighting of the lunch destination before starting the climb to Chidden and the ridge road. This climb is quite steep and goes on a bit and there were the first murmurings of mutiny in the ranks, that maybe the additional loop wasn’t such a good idea!

The effort of the climb was rewarded by fantastic views out to the Isle of Wight and the Solent. Also the road along the ridge has been resurfaced and is wonderfully smooth, at least for a while. We continued climbing to the top of Old Winchester Hill before descending into West Meon on a painfully poor road surface – obviously no money for this section! We soon viewed the pub for the second time in the day and settled down for lunch and Chris’s arrival about 20 minutes later.

Heavy clouds rolled in during lunch, dropping the already none too balmy temperature a few more degrees. Our return route using the Petersfield to QE park cycle path and then Chalton and into Rowlands Castle was wind assisted, resulting in a very healthy pace and an early afternoon coffee stop at Bumblebee’s Café. Alan’s e-bike had no issues keeping up, a very impressive piece of kit.

The new owners of the café really excel in the cake department and we all enjoyed a leisurely cake and coffee stop. I can’t help thinking though that the salted caramel slices that Michael and myself enjoyed should have some sort of addiction health warning – they are truly delicious mega calorie treats, just perfect after a day in the saddle! 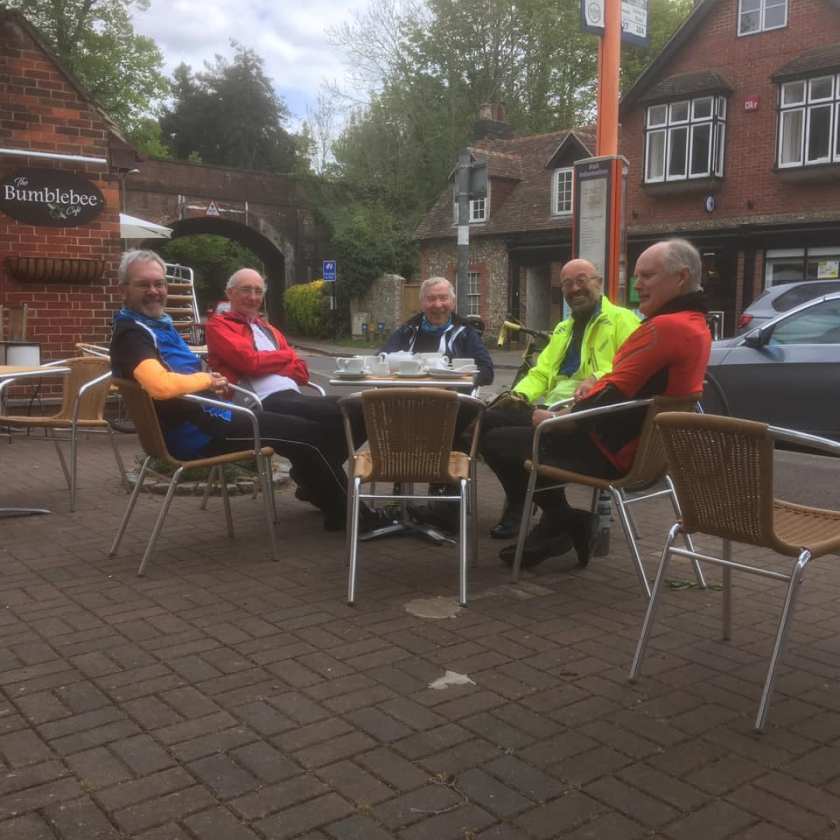 The final ten miles back to Chichester were knocked off in good fashion, again benefiting from tailwinds. For the route see map

Distance for the round trip to the Cross was 57 miles but with everyone riding to and from the start, total mileage for the riders was nearer 75-90 miles for the day.

Report by Russell with pictures from Michael