Four of us met up at the Cross for today’s ride to Stedham: myself leading, Russell, Alan and Sam. It was bright and warm in the sun, but not that warm out of it. Thankfully the wind was fairly light, as it was forecast to be northerly, so against us, going, and helpfully veering to southerly to be against us coming back.

We set off up Centurion Way, through Funtingdon to Compton for a cuppa, where we did get a seat despite a lot of cyclists, so not as bad as last week’s ride. From there we went north through South Harting, turning right at Nyewood to go through the little used and delightful if also badly surfaced lanes through Trotton and Chithurst and down Hammer Lane to Stedham. We had lunch outside the Hamilton Arms, glad of the shade still though we noticed it seemed to get colder.

After lunch we went north again briefly to go through Woolbeding and down to Midhurst, then through West Lavington and along to Selham, where we chose the route going east of Gallows Hill through Great Bury to Graffham. The village shop was still open for drinks and ice cream and we were served by a very friendly lady who was so enchanted by Sam’s banter that she suggested we let his tyres down. However we had a good chat instead, and planned our route, I had intended going though the school grounds to go back via Duncton Hill, but Russell wanted to go the shorter route via Cocking as he hadn’t been well in the week, so we decided to go with him, despite Sam’s conviction that he was bound to get a puncture on the Heyshott road. We managed (just) to get everyone in a selfie.

We went down the Graffham Common Road as I was intrigued by a post card I have, sent to my great aunt in 1912, who was a servant to a family who lived there. I had previously found the spot the photo was taken from, which is just next to the house where she was a maid. And just out of sight round the corner is a VR post box in a wall, so likely the same box the card was originally posted in, and Sam was kind enough to say he wanted a look at it. Shown below are the postcard and the same location now. 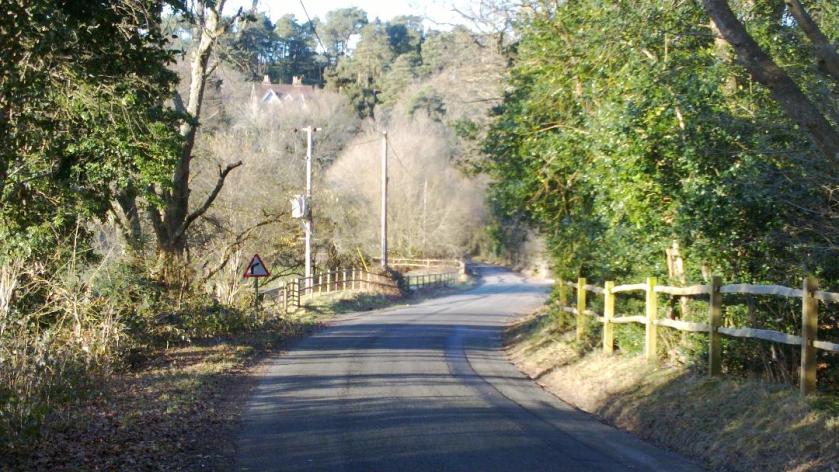 The Heyshott to Cocking road wasn’t too bad in the event (or no worse than its usual appalling state). At Cocking Sam pointed out the Moonlight Cottage tea rooms which seem to be open again, at least Friday, Saturday and Sunday so would be good to consider for a future tea stop. After I staggered up Cocking Hill to rejoin the others, we went as usual to Singleton and joined the Centurion Way at West Dean. A very satisfying ride, my mileage was 50 from and back to Chichester.