Just two of us met at Walberton Pond for the long ride on Sunday to Billingshurst, Sam leading and myself (Bob) providing the backing music. Sam has taken to the idea of leading from the rear, so I actually led while he bellowed directions.

It was actually really hot and sunny as we sat there at Walberton, so much so that I put my patented Lawrence of Arabia cloth under my helmet to protect the back of my neck from the blazing sun. This instantly caused the sun to go in, and we had only sporadic glimpses of it after until late afternoon. We went the usual way through Madehurst and Whiteways and down Houghton Hill to Wiggonholt for coffee, where we were greeted (or Sam was anyway) like long lost friends by the server chap, and indeed by a sparrow which ate out of Sam’s hand.

From there we continued north through West Chiltington, having to make a right turn at what Sam referred to as “Bob’s corner” where I came second in a ramming contest with a Landrover last year. I actually nearly rode straight past it, obviously an unconscious reluctance to turn there. However I managed it this time without charging at any motorised vehicles at all, and we turned left at the village to Broadford Bridge, then right off the Adversane Road to Whisper’s Cafe at Billingshurst. We had made cracking good time, and got to the cafe before 11.30.

We had a decent lunch there, debating whether to do the whole route as planned, especially as it was quite dull and the clouds looked black enough for rain. But we set off anyway, though of course had to cope with the Billingshurst Problem: that the only decent way into or out of it is the West Chiltington route we had come, so any alternative route is rubbish for traffic. Sam thought the least rubbishy route was the A272, so we took that to Wisborough Green. I’m not sure about whether it was the best route but it was certainly the quickest; we got to Wisborough Green in about quarter of an hour. Then of course we could turn off to use more civilised roads to Kirdford. The original plan had been to have tea there, but we got to the village stores slightly before 12.30. So not wanting a second lunch we carried on through Balls Cross to Ebernoe, where the road crosses through the middle of the cricket field. There we stopped for a breather; the wicket was all set up for a game with stumps in readiness but nobody at all around, so they had obviously been abducted by aliens. We stopped for a breather and made a complete pig’s ear of taking a selfie. We thought we’d take one that was of us in front of the wicket. The first attempt we missed the wicket and looked like zombies:

The second included the wicket (just), but, we thought, didn’t display our handsome side to the best. 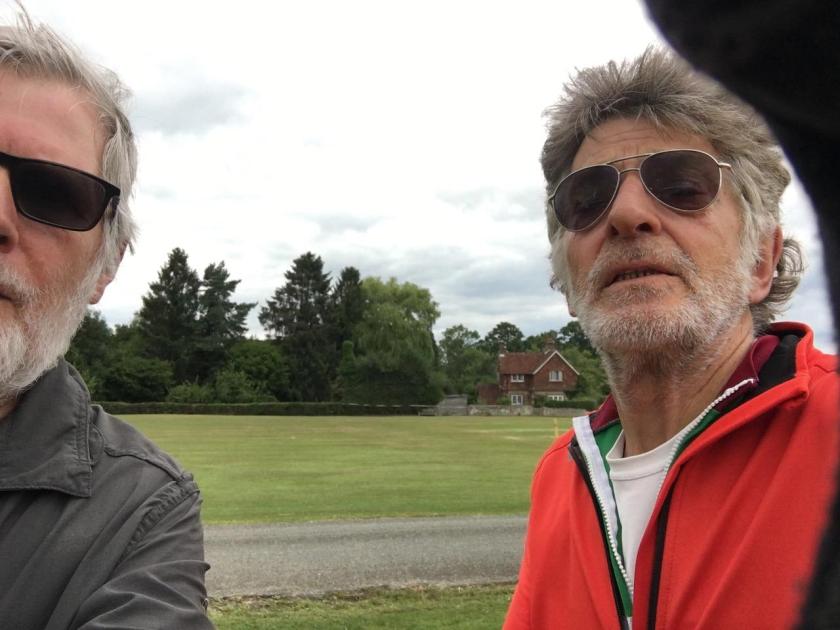 The third also got the wicket but we still looked like mafia:

The last we were happy with the cheerful way we looked, but managed to blot out the wicket entirely:

So we gave that up and set off again, and contemplating the ashes of my ambition to be a photographer I consoled myself with a pic of a VR post box down the road: 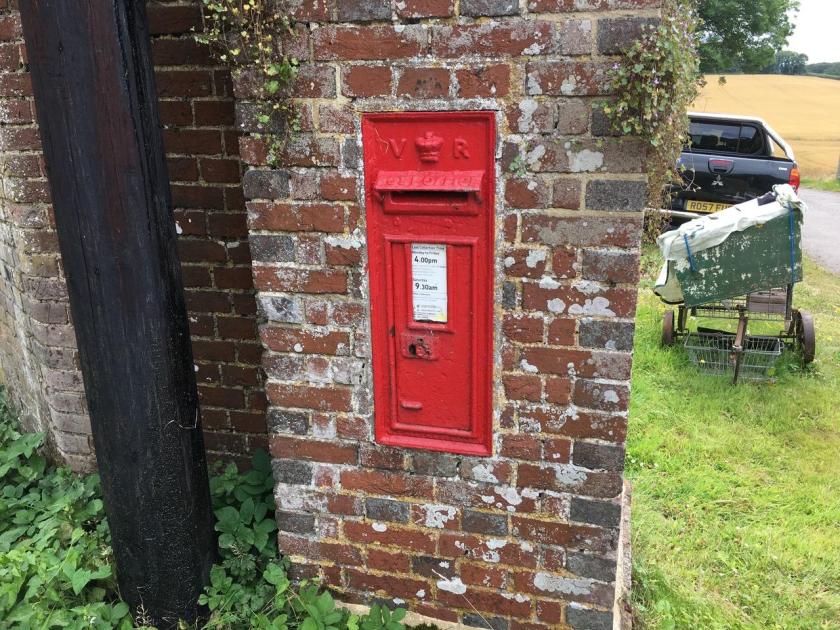 We continued through Lurgashall, Lickfold and Fernhurst, then down to Stedham where we had tea at the greenhouse cafe in the garden centre. Our respective knees had been feeling the strain a bit getting that far, and we contemplated returning straight back from Stedham up Cocking Hill. Sam had in fact planned a hillier route involving somewhere I didn’t quite catch, sounded like Everest but I may be mistaken. But anyway the ice cream and a drink at the Greenhouse revived us and we continued as planned, through Elsted and up the steep hill at Turkey island, and thence down through North Marden to return via Stoughton and Walderton. My mileage from Chichester was 73, so about 65 from Walberton, exactly as advertised! It was a really lovely day out.