Eight of us gathered at The Cross on Sunday 8th for the ride to the White Horse at Rogate, myself (Bob) leading, with Rosie, Linda, Sam, Paul, Michael, Steve and Chris, though of course Chris left us to go bellringing, planning to join us later. It was a tad cold in the light northerly wind, but bright, sunny and clear.

We set off down East Street and St. Pancras to go down Stane Street to Strettington, and up Sculpture Hill to East Dean. Thence to Upwaltham and Duncton Hill, and through Seaford College to Graffham where Jeff and Beatrice joined us just for coffee having got there by car. The cafe at Graffham struggled a bit with the numbers, but it was good to have a slightly extended coffee stop to catch up with Jeff and Beatrice after Jeff’s long absence from rides, hopefully soon to come to an end. Jeff kindly took a couple of photos of us ready for the off: 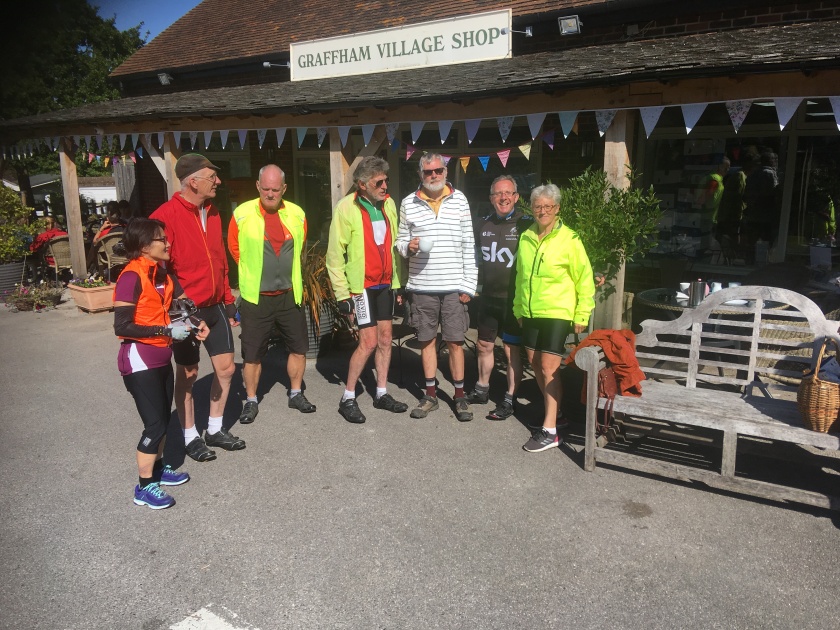 At Graffham I tried to ring the White Horse to make sure they were doing food today as ten days previously when I had ridden the route they had a temporary sign up saying “kitchen closed”, but I got no answer. So we set off north to Selham, then through Lodsworth to Lickfold, where we turned off towards Fernhurst. I tried the pub again at Lickfold without success, and had begun getting a bit nervous about lunch.

Negotiating the one way system at Fernhurst was slightly more difficult than usual due to large numbers of faithful streaming towards the church, but we continued in the bright sunshine to Milland where I tried the pub again to no avail. We decided not to risk it, and to have lunch at the Community cafe at Milland instead (I had warned Chris of this possibility). However, the Milland cafe had run out of food, which is a problem there if some kind of ride or event goes through. So we reverted to the previous plan and went towards Rogate anyway. Half way there we came across Chris, who was riding to join us at Milland having found the White Horse’s kitchen was indeed closed.

I began to wonder whether we were going to get lunch, and wished we’d bought sandwiches at Graffham. But Sam came up with the idea of Durleighmarsh, which, I was surprised to find, wasn’t far. I pessimistically began to wonder whether they might be shut as well, but thought at least we would be able to get something in Petersfield if so, thinking that if Sam’s warnings of road works on the Petersfield road came true I would be hungry enough to close them down by sheer force of will power.

So we turned off down the delightfully rural Slade Lane which, we found, did have a tarmac surface underneath the sludge, and discovered the fashion for closing down all food outlets hadn’t reached Durleighmarsh yet, so had an excellent lunch. A staff member took a picture, however half of us were in shadow and half in bright sunshine making exposure difficult and leading to a certain Imbalance of Pictorial Representation: 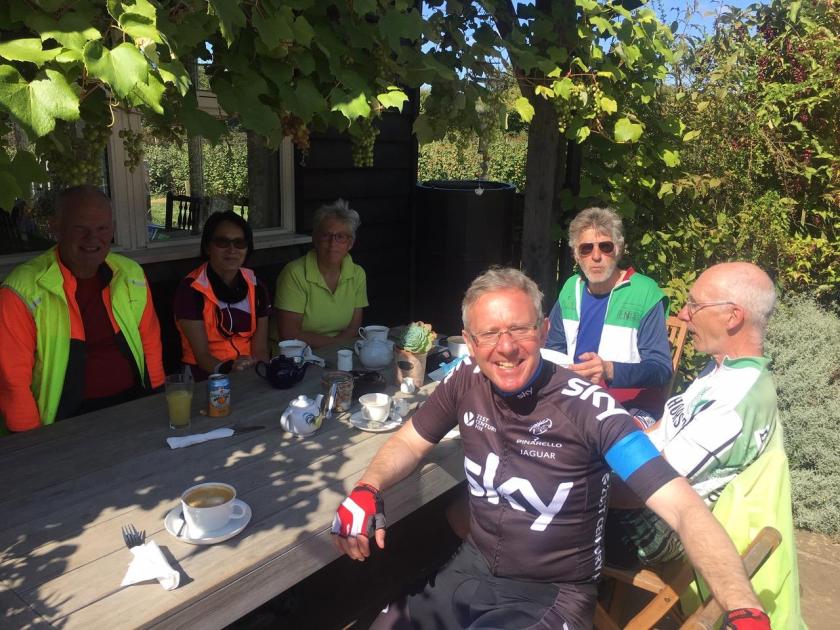 So I took two separate photos, one of the Shadowy Group:

and one of the Sunshine Group: 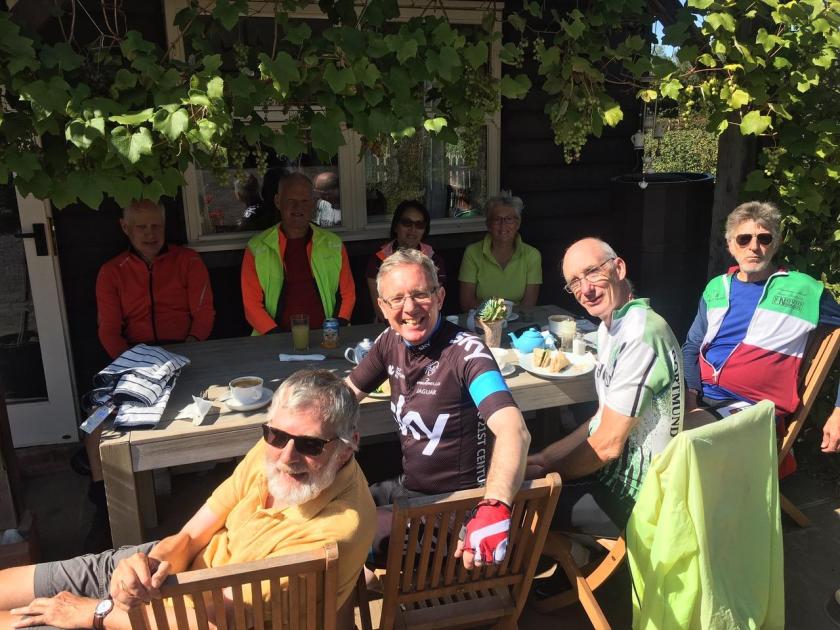 We also got a group picture as we were getting ready to leave.

Afterwards we went south through Nursted and turned off to go up the hill at Ditcham Park School, thence to Rowlands Castle, where Sam and Paul went for a tea break at the Beehive, while the rest of us carried on back to Chichester. My mileage was 56 from and back to Chi.