Three of us met at the Cross this morning for the long ride to Milland, Sam (leading plus Paul and myself, with the weather forecast threatening high winds and rain, the latter especially between 11 and 1.

As there was a lot of wet around, and with quite a lot of leaves already, I was relieved when Sam suggested missing out the Centurion Way as that was where I’d had my accident in similar conditions last year which had put me out of cycling action for quite a few weeks. He instead took us down St. Paul’s Road and turned off to Lavant, then straight down the Midhurst Road to Cocking Hill, where we set off the speed warning flashing sign telling us to slow down to 30. Actually as the wind was with us, we had been going at nigh on 20 up the hill. In fact although damp and cloudy, it was really quite fresh and enjoyable.

At the bottom of the hill we turned left and later right into Bepton Rd, and thus to Midhurst where we had coffee at Garton’s. 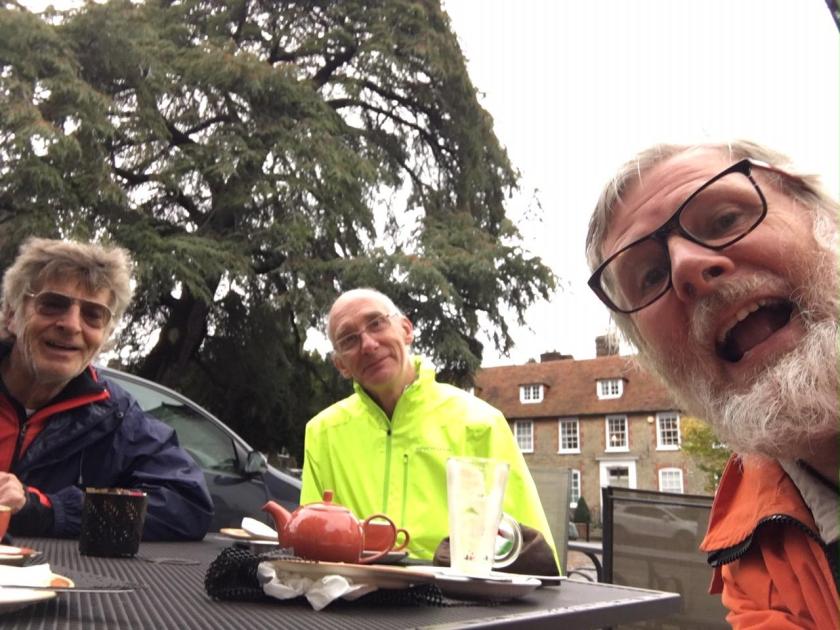 We left there about 11, and indeed it started raining. We turned off to stay on the A286 after the bridge and stopped to don hoods etc. Then we turned left towards Woolbeding, then up the long climb through Woolbeding Common and Redford to turn left at the junction to Milland. Our excellent speed had continued and we were there before 12, which meant they hadn’t run out of food.

We were pretty sodden by then, but dried out a bit in the Community Cafe which makes up in hospitality what it often lacks in food. But afterwards we didn’t feel much like making too long a thing of it, and took the south road from Milland, which was a Roman Road. Sam pointed out the site of a Roman Station as we passed it. We didn’t see any Roman Trains at the station, possibly due to draconian cuts in the network by Gitfacius Richardius Beechingus. Anyway we carried on through Iping and over the Rother. I’ve obviously got Sam well trained, as he pointed out an interesting looking post box by the bridge. Actually only an ER, though with an unusual raised border, and the “next delivery” sign had been put in upside down, thus appearing to promise a next delivery in November.

Once we had calmed down from this Epistolatory Thrill we continued over the main road towards Elsted but turned off beforehand to go towards Didling. Along the way Paul suffered a mishap with his gear transmission, which Sam helped him fix with a screwdriver Paul had handily brought in his saddle bag. 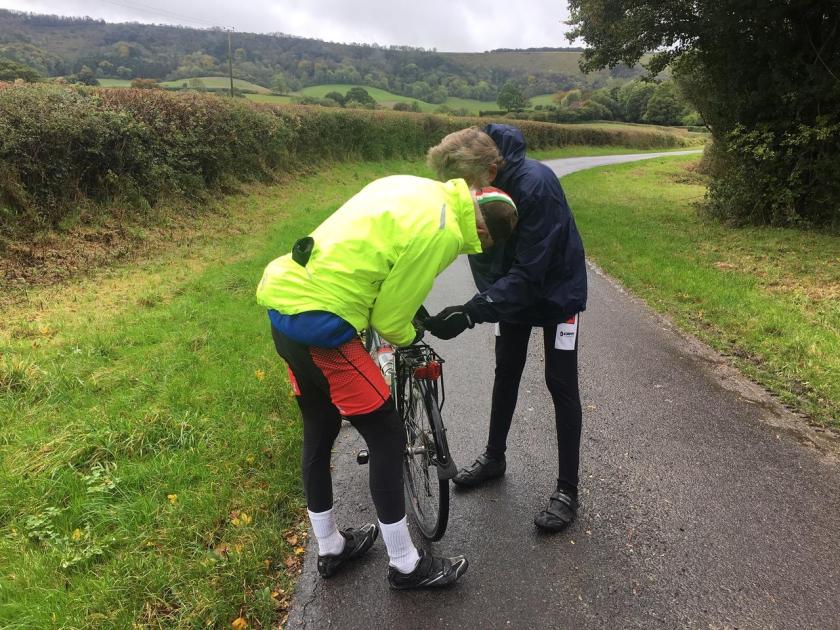 Paul made pointed comments about the problem being caused by Certain People (me) taking him on Rough Trails (last week’s sublime Meon Valley ride), but personally I think his gear transmission should toughen up a bit. Though he did make veiled threats pointing out that Northerners (himself) had seen off the Ninth Legion, though I suspect that might have been a Paul Forebear who did that as it was a while back I believe. And the Ninth were stationed in York and he is from Stockport. Really I felt the narrative integrity of his argument seemed to crumble the closer it was examined, leaving its status as a Philosophical Discourse in considerable doubt. However Sam deepened the discussion at this stage by pointing out the South Downs Way in the distance and saying it was being wrecked by 4x4s disgracefully churning it up, and it was obvious that in the coming War Against 4x4s it would be a great advantage to have someone who had single handedly defeated the Ninth Legion on our side, provided the battle plan didn’t involve too much use of Rough Trails in the Meon Valley area.

Despite our conversation falling a little short of the apex of Platonic Dialogue, we continued through Didling and thence left into Bugshill Lane, and thus through Bepton and Bell Lane to Cocking. There Sam led us to the reopened Moonlight Cottage, a B&B with a cafe open Fridays and weekends. It was really nice, if a bit small, and actually looked as if they would do a nice lunch from the menu, though they aren’t well placed for us for a lunch stop. Nice dogs as well.

Then up the hill and back. My mileage was 41.