Before we start, let’s make it clear that unfortunately our “no rain guarantee” did not apply to this ride. This is due to the T’s and C’s excluding any pre-existing conditions. It was raining before the ride started which, ipso facto, meant the “no rain guarantee”was void for today’s ride. 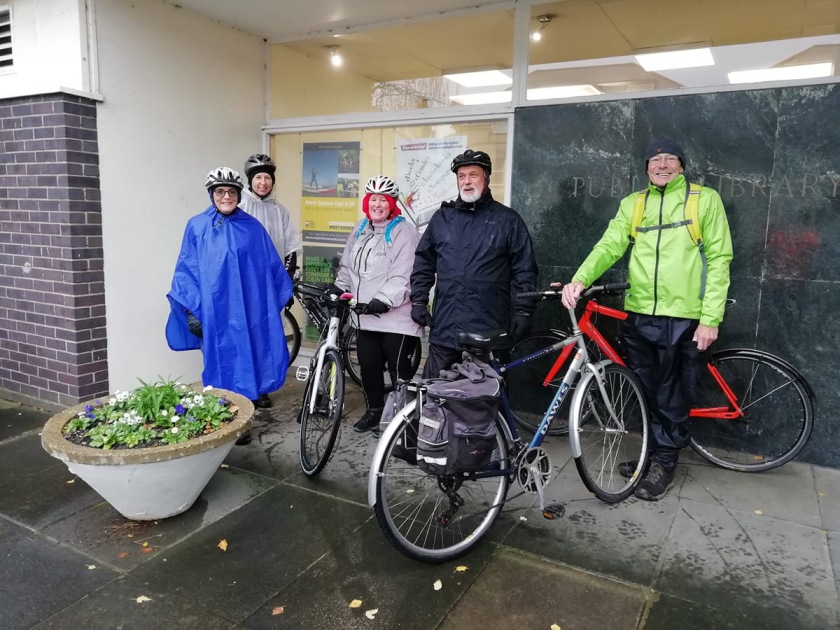 Not to worry. There were still six out this afternoon who decided that a Met office warning for heavy rain meant nothing more than a minor inconvenience.

It was the group’s view that we should set out for our intended destination of Edgcumbes Coffee Shop at Ford, so I led Clair, Sam, Steve, Kim, and Maureen under the subway to Upper Bognor from where I took a different route down Mead Lane, through the University grounds to their new Technology Park and out at the new entrance on the Felpham bypass. Then it was up to the Leisure centre and round the back emerging at the rear of  Felpham school.

At this point it was becoming clear that the elements were against us and that getting soaked whilst riding against a headwind was not all it was cracked up to be. We considered what to do and the idea was put forward to divert to the new cafe on the Blakesmead Estate. I’ve been past  “Wishfield Coffee” which is next to the Premier Convenience store several times but never ventured in.

A couple of twists and turns brought us to New Barn Lane and the re-surfaced bridleway (well, there’s no sign saying it isn’t) that leads into Blakesmead. Then the cafe was easily found. It’s nicely presented with copious supplies of cake. They also seem to do what might be termed ‘light lunches’ so possibly would be a suitable destination for a short Wednesday ride.

After whiling away time in there, the rain was if anything, getting worse so Sam Maureen and Kim headed straight for home whilst I led Clair and Steve back into Bognor where I ended the ride after an embarrassingly short 5 3/4 miles. But at least we got out there and did it!