This was the first Cycle Bognor ride we (Dave and Lucy) have led, so we were very pleased it was such a sunny if somewhat chilly day.The no rain guarantee (hidden in some T & C somewhere) didn’t have to be consulted at any point! We took a register and started with 16 riders– it was good to see Dave and Sheila Barton who we haven’t seen on a Saturday ride for a while 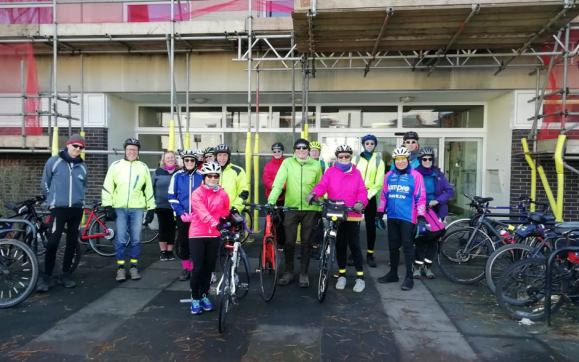 We divided into two groups with Dave leading the 1st group (Claire as back marker) and Lucy led the second group (with Dave Barton at the back). The group left Bognor Library just after 12.00, from Bognor Library, went through the underpass near Hotham Park and headed towards the Leisure Centre.

We passed the Golf club and joined the cycle path to Littlehampton. At Comet Corner we met up with Steve, Carol and Sam, making it 19 altogether on the ride. We took a group photo and started off again.

Sadly, almost immediately Rosie pulled up with a puncture. This is her third puncture in the last couple of weeks, so let’s hope – if these things come in threes – that this is the last one for a long time. She abandoned the ride and waited for her husband to pick her up.

We turned down towards West Beach,crossed the swing bridge over the Arun, then down to the prom, where we rode along the prom managing to avoid numerous children on scooters. Perhaps something to avoid another time?

Both groups continued along the sea front towards Rustington turning away from the sea up Sea Lane then cut through to Broadmark Lane. We turned right into the various private estates in Rustington, admiring houses and seeing how the other half lives.

We stopped at East Preston at Grub and Gumption a lovely little café. Sadly, they’d had a run on their bread in the morning and only had one savoury meal on the menu left, so most of us had cake for lunch.

Whilst there we met up with Michelle Scott and her daughter who joined us for a cuppa.

Bob and Gill decided to cycle back independently on their tandem – it was lovely to see them again.

Having been replenished, Lucy left first with her group to return to Bognor, meandering through the private estates and then through the back roads of Rustington and Littlehampton.

Somehow on this journey Robert and Alan, very generously, stopped to help a lady park her car. It is good to see the age of chivalry is not dead!

We left the cycle path at Comet Corner, cycled through Middleton andby the time we cycled round George V most had filtered off with the remaining cyclists going back to Bognor along the Sea Front.

Below is the map of the route.

It was a round trip of 23 miles. Lucy and I really enjoyed leading the ride, it was a pleasure to cycle with such supportive and friendly people. Thank you!