Five of us met at the Cross on Sunday 5th July for the long ride to the Flower Pots Inn, Cheriton; myself (Bob) leading, with Paul, Sam, Linda and Mark. It was pretty windy especially on the way out.

We went via Rowlands Castle to stop for coffee, mainly to stock up for lunch, as the Flower Pots, although serving their excellent beer brewed on the premises, was sadly not intending to serve food due to kitchen refurbishment. At Rowlands we had our first taste of the new government regulations for hospitality, and distinguished ourselves immediately. There was a nice big, clear sign at the entrance to the Bumblebee telling us not to order at the counter unless we were taking away, but sit at a table to order and be served, providing our name, rank and number so we could be hunted down and quarantined if necessary. We didn’t even notice the sign so cheerfully walked straight past, ordering at the counter as usual, then went outside and sort of sat at a table but also stood, completely unable to say if we were taking away or drinking in, half of us giving our details and half not, but not moving very far away either.

Sam took a lead in this process, doing a sort of Hokey-Cokey stepping in and out from the tables and boldly giving his details reluctantly in order to be decisively indecisive. It was good to take comfort in the fact that everyone was having to cope with the new situation together, except that everyone else in Hampshire seemed to have cottoned on without the slightest difficulty, we alone acting as Pioneers of Brainlessness with no-one else competing at all. Searching for someone to compare ourselves to favourably we went through Eddie the Eagle, commanders of the Light Brigade, the Sinclair C5, Prince Andrew’s PR officer, the chap in the American Civil War whose last words were “they couldn’t hit an elephant at this dist….”, and finally in complete despair had to make do with Matt Hancock.

Anyway suitably refreshed, we continued via Catherington and down the hill and took the back roads towards the Bat and Ball. On the way however Sam (or at least his bike) got a puncture. Sam and Paul got on with mending the puncture, but Mark, Linda and I did the serious work of finding out what had caused it, and a systematic exploration revealed that it was in fact Mark’s fault: seeing a magpie some minutes before he had saluted, whereas the scientifically correct response (according to my mum) is to say “hello Mr. Magpie, how’s your wife and children today?”, a deficiency in Mark’s education I was pleased to fill leading doubtless to fewer punctures in Rides To Come. As we were beside a fairly new vineyard we also assisted the process by reminiscing about drinking wine in the ‘70s, which mainly involved Mateus Rose imbibed through flared trousers. 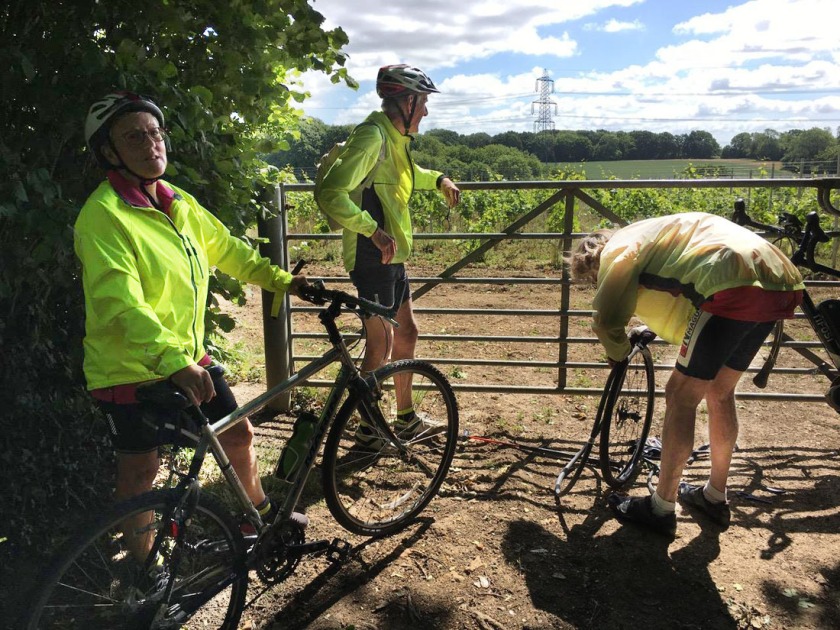 Puncture mended we continued to the Bat and Ball, over to East Meon, down the valley to West Meon, and up the 224 cycle route that starts as Church Lane. I was delighted to find that the road name as it goes through Bramdean Common changes to Uncle Bill’s. Uncle Bill’s what isn’t clear, but they do have a very personal, sometimes frankly anatomical approach to geography round there. We turned left at Manor House Farm and up the steep hill, on to Cheriton Lane and across the old battlefield, where due to shortage of time we had to confine ourselves to re-enactment on our bicycles, thus using technology unavailable to Generals Hopton and Waller.

The beer was very good at the Flower Potts Inn, but they really didn’t do much else, not even tea or coffee, which Sam was miffed about having to make do with lemonade. But they were very friendly and organised and had a contact tracing thing involving text messages, which seemed a good idea. The big garden meant lots of space, and open loos and staff poised to boil them after each piddler. It was quite popular, by the time we went to go there were lots of bikes parked. 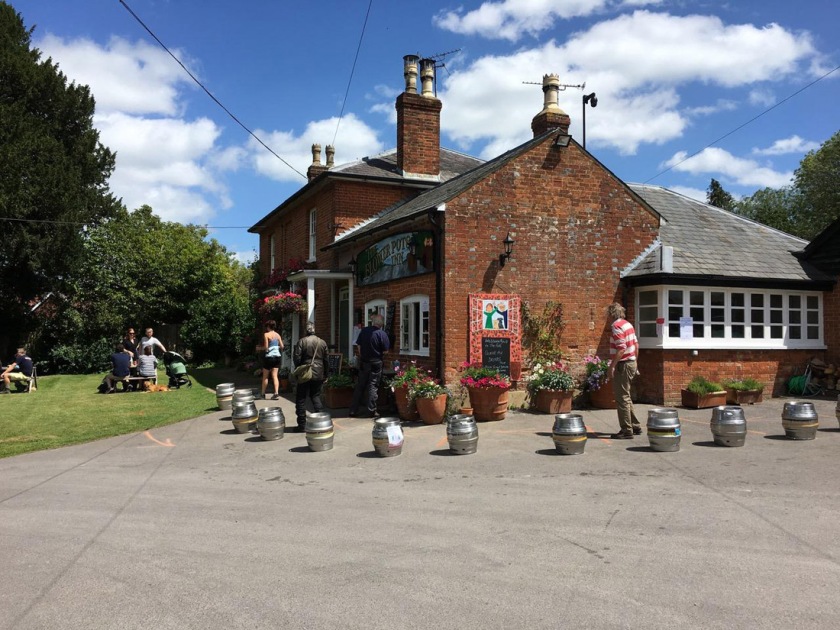 We returned via Kilmeston and Wheely Down, thus passing quite close, I was pleased to see on the map, to Betty Mundy’s Bottom. We then skirted carefully round Henry Robinson’s Spleen and fairly shot up Mary Watkinson’s Armpit, and so to Warnford and up the long hill to Old Winchester Hill where we just missed the coffee van but didn’t miss the hoards and hoards of cars mystifyingly wanting to clog up Hayden Lane, park at the top and sit in their cars. I began to plot ways of filling up the new Eco Burial site at the Sustainability Centre with their bodies, but instead we carried on along the ridge to Clanfield and Charlton, and thus down to Rowlands again.

I wanted to get back in order to Clap, and Linda and Mark also wanted to carry on, so we split with Paul and Sam stopping for tea at the Bumblebee, hopefully Managing The Process better than last time. Linda and Mark left me to go back through West Ashling, and I have a fear that Mark may have seen a magpie again and Done the Wrong Thing, as I had another spoke break at Southbrook (second in a week), fortunately I was still able to ride it ok.