The ‘noble six’ rode out from Chichester Cross at 8.00am this morning in an eight-degree centigrade windchill towards Midhurst, via Alfred Lord Tennyson’s House, Aldworth on Black Down. Sam, Adam, Alan, Maureen, Bob and our intrepid leader, Michael ventured off up Centurion Way and out past Lavant School and Stables and on to the A286 past Anthony Eden’s former home “Old Binders” in Binderton and on through West Dean and Singleton and over Cocking Hill. The Team sped down through Cocking and turned right onto Bex Lane and rode up and down the country lanes to Graffham Village Store for morning coffee. During the coffee stop we were entertained by Sam’s stories about his taxi days, driving Charlie Watts (from the Rolling Stones) home from the Night Club; the time that Sam made an incredible retracting staircase into the basement of Duran Duran drummer Roger Taylor’s house for his most challenging client – Roger’s wife; and Alan’s story about Chris Evans ordering a pink Rolls Royce from the Chichester factory and donating it to Breast Cancer Relief; and the fact that Nick Mason from Pink Floyd lives in Dell Quay, owns a host of racing cars and rents them out to clients. 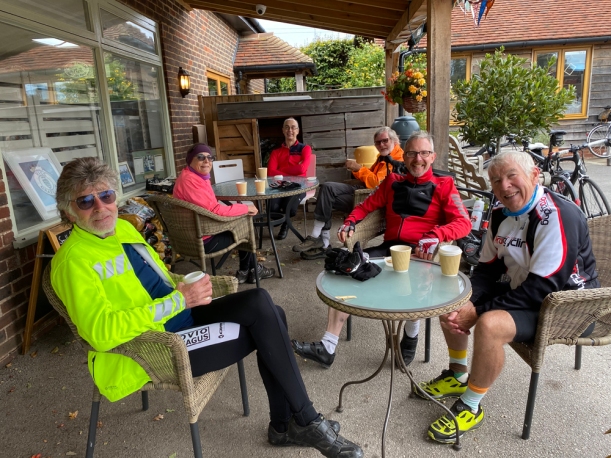 After this plethora of fabulous stories, the magical mystery tour moved on out towards Lickfold and Lodsworth, where EH Sheppard, the illustrator of the Winnie the Pooh books once lived; and Lodsworth was once the home of Ranulph Fiennes, who was known to set fireworks off around the village when film crews arrived and started filming.

The ‘noble six’ soon found themselves at the foot of Black Down, and the ascent began in earnest! It was tough going climbing up Quell Lane to the house called ‘Abesters’, which included a 21% ascent. We had all crunched our gears as far as they could go and were left relying on sheer mental strength to keep ascending. Sam and Alan reached the top first, followed by Michael, then Adam and Maureen; followed by Bob, who was obviously suffering, walking his bike the last few metres to the gates of ‘Abesters’. Sam told the assembled throng of very tired cyclists that there would be no more ascents up Black Down – we didn’t realise it at the time but Uncle Sam was being economical with the truth, but these little white lies were “to help Bob and Maureen!!!” After a jolly ride up and down the country lanes on Black Down, cycling past Tennyson’s former house at Aldworth, we started the long descent towards Midhurst, riding back through Lickfold, Lodsworth and Selham. Hearts dropped when Sam thought it would be a jolly jape to turn right in Lickfold and pretend to start to climb Bexley Hill; at which point Bob and Maureen threatened to mutiny, before ‘our illustrious leader’ put an end to such jollification!

We soon realised that Maureen was tired when, every time we stopped to allow a rider to catch us up, she would do her sleeping beauty impersonation draped over the handlebars. ‘Our illustrious leader’ soon realised that he needed all his wits about him when he was sent a cropper and joined the airborne division. Following this airborne interlude – which wasn’t half as impressive as Maureen’s airborne display on the A259 earlier in the summer – we all cycled on for lunch at Garton’s Cafe in Midhurst, where we found ourselves being served by Father Ted’s housekeeper, Mrs Doyle, and Sam soon entered into some blarney with this amazing woman, who ran the cafe as her personal fiefdom. During the lunch break we discussed the concreting over of Chichester and Arun with housing developments, and we considered whether it was worth starting a rebellion in an attempt to stop the housing building; the fact that there is a lack of cycleways in the two districts; and the discovery of a Roman camp or fort in Chichester.

After lunch, it was decided that we would cycle out along the country lanes to Bepton and Cocking and ride back over Cocking Hill, on to Singleton and Lavant, from where Sam and Bob took their separate ways to Chichester; and Michael, Alan, Adam and Maureen cycled to Bognor Regis and Felpham via Tangmere and Colworth.

The ‘noble six’ cycled 54.9 miles from Chichester, back to Chichester, climbed up to 3,724 feet, with an average speed of 11.9mph and a maximum speed of 44.5mph and the most recited quote of the day was “not another hill!!!” By mid-afternoon, the sun had come out and the temperature had risen to a balmy 16 degrees centigrade.